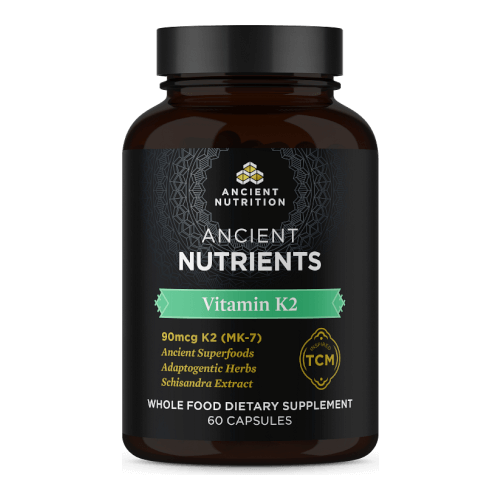 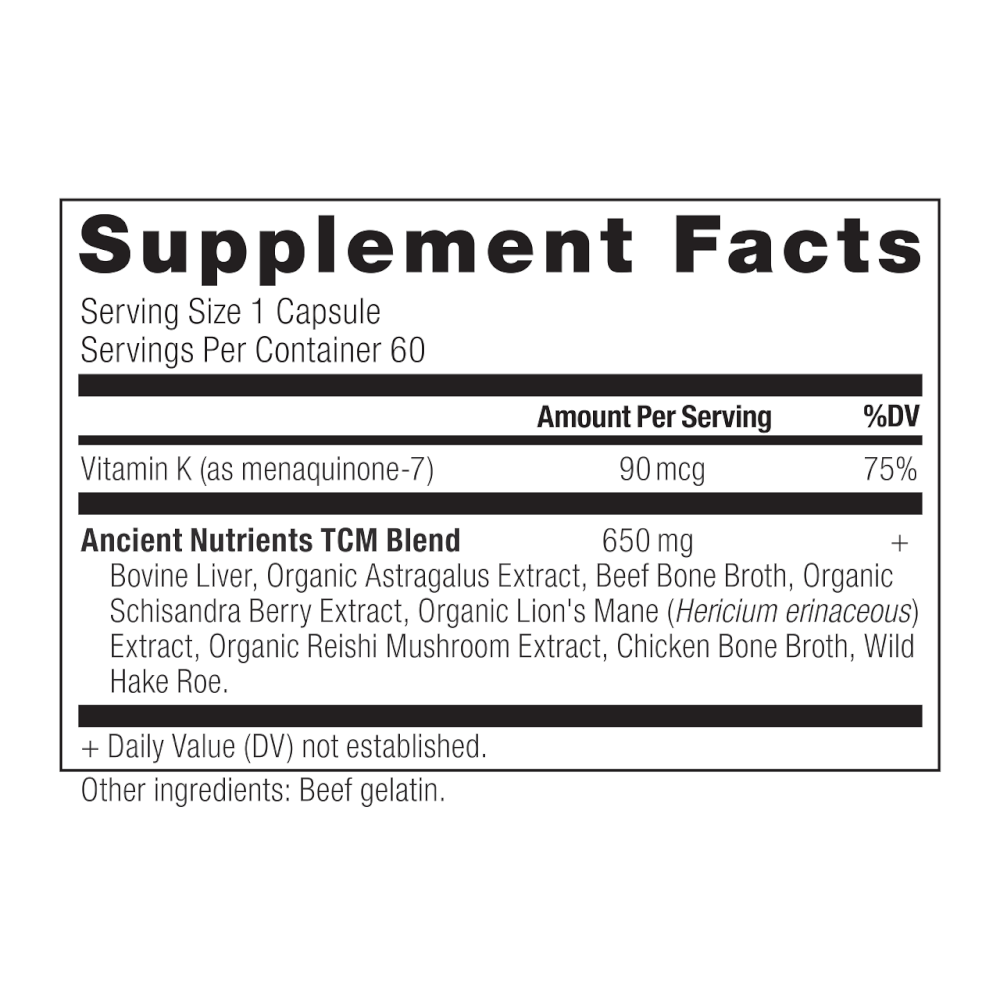 Soy-Free, Fermented Vitamin K2 (MK-7)
Functionally, vitamin K plays a strong role in bones and normal bone metabolism. Vitamin K2 also generally functions to ensure calcium gets to the right places in the body, such as the bones and teeth and not where it shouldn’t, such as in the arteries or brain.

Organic Astragalus Root Extract
Rooted in TCM, this adaptogenic perennial plant is also known as milkvetch root and Huang-qi and is hailed as an overall health supporter.

Bovine Liver
An ancient nutritional powerhouse, liver is one of the most nutrient dense foods on the planet. Containing vitamins A, D, B12, B2, B3, B5, B6, omega-3s, iron, folate, zinc and more, this liver from pasture-raised New Zealand cattle is amazing.

Organic Reishi Mushroom Extract
Known as the King of Mushrooms, the reishi mushroom is an edible type of beneficial fungus cherished for thousands of years. Also known as Ling Zhi in Chinese, TCM utilizes reishi traditionally and generally to support a healthy immune system.

TCM Formulation
A formulation more than 2,000 years in the making and built using the TCM (Traditional Chinese Method) of formulation, Ancient Nutrients Vitamin K2 features the time-tested superstars of TCM to bring a holistic approach to your daily vitamin K2 supplement. Using the traditional Chinese approach to wellness, the aim is to tap into centuries-old ingredients and practices to support the body as a complete system rather than separate organs, a larger concept known as “Qi.” TCM ingredients aim to balance and support qi, also known as life force.

Balancing, 3-Kingdom Approach
Honoring TCM, Ancient Nutrients Vitamin K2 contains specific superfood and botanical combinations time-tested through the ages. This includes a broad-spectrum of potent, TCM-approved ingredients joining together for the first time in multivitamin form to include superfoods and superherbs from multiple kingdoms: The Fungi, Plant and Animal Kingdoms.

Body-Ready Vitamin K2
We did the work so your body doesn’t have to. Ancient Nutrients Vitamin K2 contains bio-friendly vitamin K2, herbs and superfoods treasured in TCM.

More Info on Ancient Nutrition Vitamin K2 60 Capsules
† Statements on this website have not been evaluated by the Food and Drug Administration. These products are not intended to diagnose, treat, cure, or prevent any disease, but rather are dietary supplements intended solely for nutritional use.
My Account