Maintaining bone density and strength is about adding calcium. But it must be accompanied by adequate amounts of other vital nutrients. That’s why this proprietary, comprehensive mineral formula provides 700 mg of highly absorbable elemental calcium from three different forms, along with the critically important minerals magnesium, boron, zinc, manganese, and silicon, plus vitamins D3 and K2, needed for healthy bones. 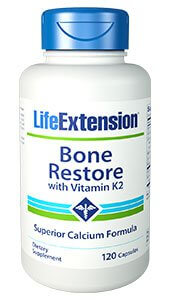 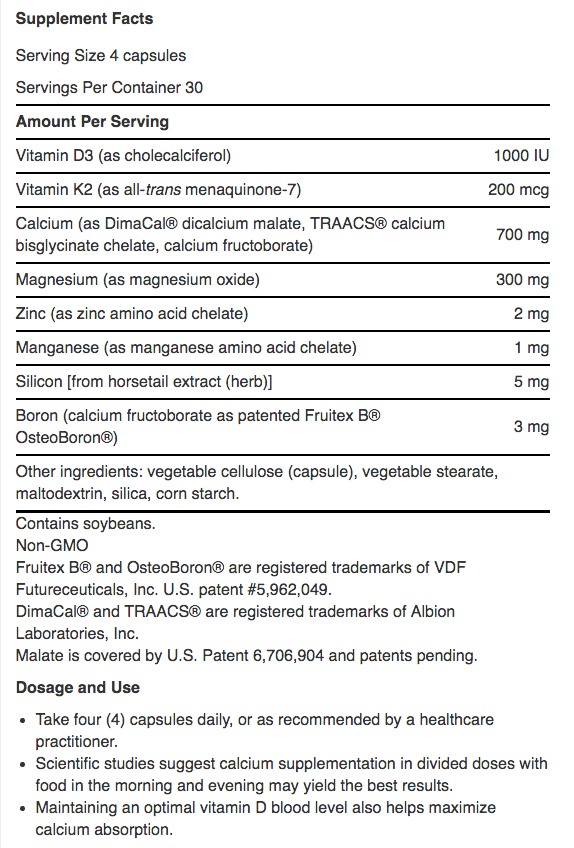 The most abundant mineral in the body, calcium is primarily found in bones and teeth. Men and women may take calcium supplements and still suffer from a loss of bone mineral density. Why? Most people don’t get enough calcium to offset the amount being lost in the course of aging. Additionally, many forms of calcium are not well-absorbed.1-3 Bone Restore with Vitamin K2 provides three types of easily absorbed calcium — dicalcium malate, calcium fructoborate, and calcium bisglycinate chelate — in capsule form to ensure it breaks down fully in the digestive tract.

Other important minerals and nutrients are also crucial for bone health

Loss of bone density is not just associated with calcium deficiency, but also with an insufficient intake of many other nutrients including magnesium and vitamin D3. In order for calcium to help maintain healthy bones, adequate amounts of magnesium, zinc, manganese, vitamin D3, and other nutrients should be available so that calcium and phosphorus can be incorporated into the bone matrix.

Post-menopausal women commonly experience loss of bone mineral density, but men can also face this issue as they age. And both men and women may experience significant deficits of magnesium if they do not supplement. One of the body’s most important minerals, magnesium is needed to maintain strong bones and is critical to promoting a healthy vascular system. In fact, magnesium is essential for more than 300 different biochemical reactions in the body. Bone Restore with Vitamin K2 contains 300 mg of magnesium from magnesium oxide.

Scientific research has established the beneficial effects of the trace mineral boron on the strength of bones and joints. This formula contains patented FruiteX B OsteoBoron, a powerful form of boron made from a calcium/carbohydrate/boron complex similar to what is found in fruits and vegetables. FruiteX B OsteoBoron is more bioavailable than boron citrate, the nutrient used in most commercial bone building supplements.

An abundance of human clinical data reveals that vitamin K plays a critical role in maintaining healthy bone density by facilitating the transport of calcium from the bloodstream into the bone. Poor vitamin K status also results in increased circulating levels of undercarboxylated osteocalcin that is shown to be associated with increased bone loss in post-menopausal women.

Vitamin K2, the menaquinones, is a family of related compounds found in meat, eggs, and dairy products and is also made by bacteria in the human gut, which provides some of the human vitamin K requirement. Human research has shown that vitamin K2 is more bioavailable than K1. In recent years, two forms of vitamin K2 have been extensively researched and the findings reveal vastly improved effects compared to K1. The MK-7 (menaquinone-7) form of K2 remains at a significantly higher level in the body 24 hours after being consumed and accumulates at greater levels (seven- to eight-fold) during prolonged intake.

Adding Bone Restore with Vitamin K2 to your whole-body health regimen is a great way to get all of these critical, bone-health nutrients in a single, convenient formula.

More Info on Life Extension Bone Restore with Vitamin K2 120 Capsules
† Statements on this website have not been evaluated by the Food and Drug Administration. These products are not intended to diagnose, treat, cure, or prevent any disease, but rather are dietary supplements intended solely for nutritional use.
My Account